Our ride today was from Greymouth to Punakaiki which is half way to Westport. The weather was beautiful this morning and stayed that way the entire day. It's hard to say how much the clear sky influenced this feeling but this was one of the more fantastic segments of the west coast. The road was constantly winding and full of small hills alongside the sea surrounded by native vegetation. I often find that I take pictures that completely fail to capture what I want to show of the road or the scene, so here's one of my bike instead. You can see further bits of the road in the background, actually. 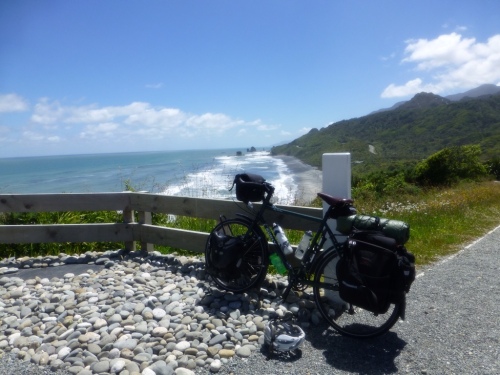 Punakaiki is a tourist spot due to the presence of pancake rocks and blowholes. We arrived shortly before high tide which is the optimal time to see the later. I took videos of the blowholes but can't get them off my camera with my iPad.