In leaving Waihi I got on SH25 heading into the peninsula and off of SH2 which now runs to Auckland. This means no more bonkers traffic. Feeling almost no wind as I head slowly up the Waihi Saddle climb. When I make it down the other side I'm greeted with a strong westerly wind as I try to head north/north west. I swear if I ever encounter a windier place than New Zealand I'm going home immediately! 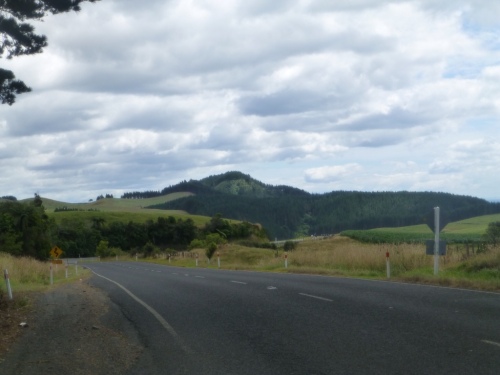 I ride on, fighting a bit of wind and some hills until Whangamata, the place I had hoped to be the night before. First town actually in the peninsula and its obviously pretty tourist packed. Was a little bummed at first until I discovered Telecom covered the area I was eating lunch in with free wifi. It's been a few days since I've eaten out so I stopped to get a sandwich and laughed as the wind blew away my order number card and knocked over the salt shaker.

From there it flattened out until Opoutere Saddle. I make a climb to about 190m, drop down some then have a stiff incline back up to 200m. It's taking everything I have in my legs to get myself up this. I reflect on why I'm unwilling to walk it but keep mashing the pedals. Bottom gear, 6kmh, ugh. I get to the top and the ride down is just as steep. Steep enough to be a little terrifying, actually.

Shortly after I crossed the top I saw a cyclist walking up the hill, it was next to a rest stop so I pulled in to chat and, well, give my body a chance to catch back up. A guy from Russia, with brand new looking panniers. Turns out he started in Auckland so he's only about 250km into his tour at this point. He asks about the terrain and traffic going the way I came. Hilly and soon it will be heavy traffic, I tell him. “Ah, I may take a bus for part of it. I'm 50 years old and this is my holiday, I don't want to keep clomping.” As he smacks the cleat in his shoe against the pavement a few times I get the choice of wording.

I'm sure I'd have been in a similar place if I started out up here, but I am glad I had a couple months of the more forgiving South Island terrain to get me in shape. I can't believe I'm calling that terrain forgiving though, but while it had huge climbs and frequent mountain passes, you may have only one or two steepish and tall climbs a day. Instead up here every day can have a dozen small and extremely steep hills.

Tented at another backpackers and I was woken pretty early by some loud squawking outside of my tent. When I climbed out I discovered about 6 of these weird birds strutting around my tent and bike squawking. Not sure what they are, though. I'd like to eat one of them for waking me up at 7am.