I'm running out of time. I knew I wouldn't be able to do all of the north island but I am only now coming to accept how little I am able to do. A while back I plotted out my goal for the north island, a dash to the top (Cape Reinga) then back to Auckland. Of course, I never follow any plan that I make ahead of time here. It really is a good way to tour, have a vague idea of what you might do, but ask everyone you see what you should do and find a better plan. The straight shot skipped the east cape area (cutting direct from Gisborne to Tauranga) and did not do the peninsula.

Well I spent a week slowly bouncing from bay to beach along the east cape and am set on strolling up the Coromandel Peninsula as well so I had to skip Lake Taupo (set next to “Mount Doom”) and Rororua (geothermal area of interest that apparently smells foul). I also had to skip Hobbiton, which is something everyone from home seemed to think would be a requirement while here. It was still in my plan to make it to Cape Reinga though. They may be small islands but there is so much to see I could probably spend years here just exploring.

I set out to make it to Tauranga, a port city. My great luck with the weather finally left me. I fought an annoying crosswind most of the day. Perhaps it was weaker than what I often had on the South Island or I'm getting stronger (though my legs feel like mush currently) as I was keeping a pace of around ~15kmh as opposed to the 10kmh I would have during South Island heavy winds. 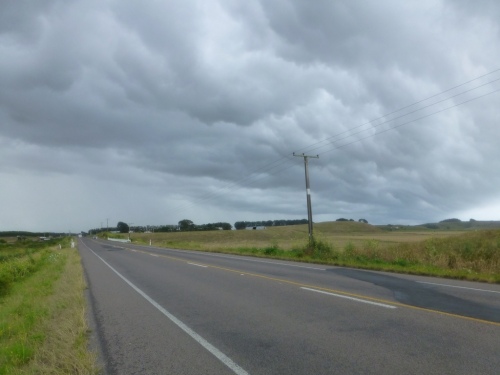 If the winds weren't enough, dark storm clouds moved in and I spent a while getting rained on. I'm actually not able to remember the last day it rained steadily during my riding. Surely hasn't been since early on the north island or maybe even further back than that. No complaints there! 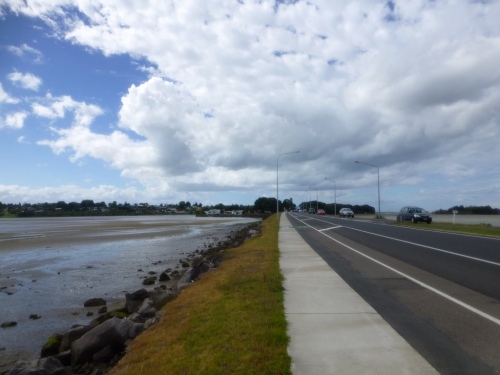 Tauranga is big enough to have a YHA, so I took advantage of the cyclist discount and got myself a bed. A good decision too, it stormed pretty hard overnight and the winds were pretty loud even inside.

I've been getting pretty used to figuring out which road, as there is usually only one, is going to take me to my desired destination. So, silly me, didn't read Pedallers' Paradise before leaving. I left Tauranga riding State Highway 2 all the way to Waihi. The guide had this to say about that segment.

Note: SH 2 between Waihi & Tauranga has a reputation for heavy and sometimes dangerous traffic and is called “Suicide Highway” by some!

Now, given I did not see this coming, I make the right turn leaving town on the roundabout and am plunged into what most closely resembles an interstate highway in the states. Oooooohhh boy.

I can't shake the feeling I'm really, really not supposed to be here. I'm pedaling along 17kmh against the headwind still present on the side of the shoulder as a few lanes of cars barrel by me. I see the occasional bicycling related sign which continues to reassure me I'm not doing anything wrong. Well, legally wrong, I still don't want to be here. I didn't stop to take a picture because I didn't think anything good could come of lingering on the shoulder of this road.

The further I get from Tauranga the more the road calms down. The cement wall divided highway with on/off ramps gives way to a normal double lane highway, then two lanes each way drops down to one. The shoulder remains for the vast majority of the ride (and for this I was so grateful). Despite heavy traffic, my slow legs and my dipping in and out of traffic for every bridge or occasional narrowing of the shoulder, people were rather courteous. I was honked at twice in my 65km time on the road. Once while I was about 6 feet from the road in a huge shoulder and once by a guy who didn't think he should have to use the passing lane to pass me. I waved and eventually he found the other lane.

I had wanted to get to Whangamata, 36km into the peninsula but between stress of the crazy road and being tired from another day of head winds and 700m climbing, I called it a day at Waihi. It was an okay day I suppose but it left me seriously missing the peacefulness of riding in the South Island. It also left me wary about my trip going north of Auckland, as I know those roads are going to be heavy traffic as well.