Pedallers' Paradise and the sites I've used to look into routes all recommended taking a boat out of Queenstown and the back roads (all dirt/gravel) to get to Te Anau. The boat ride was pretty cool, an old renovated boat cruising through the lake with Queenstown in the background.

Now, I love dirt roads but gravel isn't something the combination of my tires and weight I'm carrying do well with. The road was more often gravel than dirt and the big hills (going up and down) were particularly thick with it so I was thankful for disc brakes (as I often am) when I had to hold them the whole way down hills.

As has been the case most days in the last week, the wind was really hitting hard today. I struggled against heavy head/cross winds the entire day. Had to get off and walk a few hills as it took most of what I had to keep going 10mph on flat ground and I didn't have the power to climb a 12% grade on gravel in it.

For a while, I was well rewarded for my struggles with the terrain and wind. I was in a beautiful area of the country completely alone and enjoying the quiet.

Something the guide didn't mention was that this road also required me to ford a river. Just what I love, wet shoes. My photography skills make this look like I could hop across but it was about ankle deep and long enough I had to walk through. 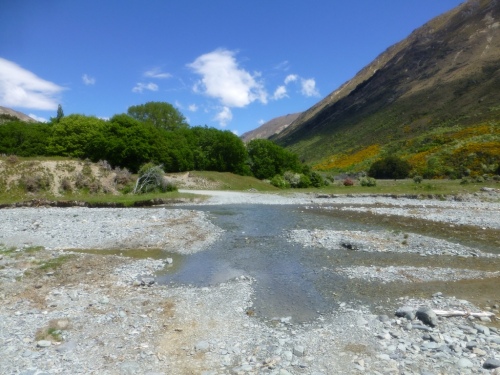 At a later point before the big climb at the end of the hard part of the day (around 250 meters gain in 2km) I was hiding in a ditch under a tree trying to avoid the wind and eat when I spotted Jim and Tonya again, going the other way. Was pretty pumped to see friendly faces (or any faces for that matter, I think I hadn't seen another person in about five hours at this point). Jim seemed quite angry about the wind lately as they had been fighting the same weeks worth of head winds that I have it seemed (before today, since they're heading mostly east now). Tonya told me there was a “whole new country” past the hill but it was extremely rough and steep and on the other side the wind was worse. Lonely and empty, she said.

I don't think the wind was any worse than what I'd dealt with all day but she was right about the new world. The grass wasn't so green, there were no sheep or cows, no houses. Nothing.

After an hour of ramming into the wind in the middle of these plains I forded my second river of the day (my shoes had just finally dried off from the last one!) and life started returning to the world. Cows, green grass and some bushes were around.

By this point I'm down to about half a bottle of water that I'm trying to save because I'm not even sure I'll make it to camp tonight and I keep thinking I may be sleeping behind a bush in one of these fields. On I go into the wind and finally a while later I make it to the Mavora Lakes. Water and camp! Uh, okay so no water it turns out. $6nzd domain camping at a nice lake but no drinkable water. Tomorrow might be a little rough. It's 60km all downhill except one small hill from here to Te Anau but the guide mentions no services along the way. I packed well with food but hadn't considered I would actually need to fill my giant platypus water bag. Going to fill my bottles with water from the taps that say “unfiltered stream water, treatment recommended before drinking” and hope everything turns out okay.

To top it off, I got slammed by what seem like gnats that bite while setting up my tent. I later found out that these were the infamous sand flies of the west coast. I'm not that far west yet, I thought. Anyway, I pulled out the bug repellent I brought from home and after a few trips in and out of the tent (with some time spent murdering bugs) I've got quite the mess on my tent floor.