I got on the road before 9am and realized that today was my 8th day in a row in the saddle. For the last two days on the rather flat rail trail my legs have felt great. It was obvious my body is getting used to so much time pedaling. Today I knocked that good feeling right out of them.

About 30km from camp was the city of Cromwell. Reasonably sized but nothing too interesting. About 10km away from camp the wind really picked and I was pushing into a good headwind. I probably should have called it a day at Cromwell. Unfortunately for my legs I got there by shortly after 11am and decided I had to stick to my goal of 90km total, finishing in Queenstown. Hey, the wind will probably stop soon, right? Ugh. I pushed into the wind for at least 50km of my day. Originally when I had days like this they really got to me, it's pretty discouraging after all to be down in the granny chainring just to keep moving on flat ground. At this point I'm pretty used to it. It makes it a long, exhausting day but the scenery was beautiful so as soon as I gave up any hope of getting to Queenstown early or having working legs I just sucked it up and enjoyed the view. Sadly no good pictures of this as the road was narrow and had little to no safe places to stop when the moment was right for a picture.

In the end I made it to Queenstown quite late, finishing camp setup and a shower by about 8pm. Queenstown is a huge, huge tourist destination. It's full of everything you can imagine doing. Rafting, kayaking, heli-biking (they fly you in a helicopter to where you start your downhill mountain bike trip), bungee jumping, etc. Everything is close to or well over $200nzd so I don't really know that I'll join in on any of the fun.

The town center is jam packed with tourists which gives it quite the different feel than a lot of the places I stay. The South Island is in large part very sparsely populated. At least once every few days I stay somewhere that has little more than a pub and a dairy so this is a little different. 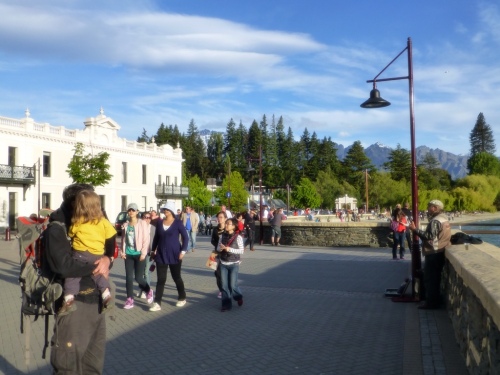 Per Nathan and Justin's advice, I wound up pitching my tent behind a hostel. Super cheap (compared to the motorcamps here that are swarmed with camp vans) and I get to use nice hostel facilities. A lot noisier than usual, though.

Most of my comments on the gear I brought was being saved for a post of its own later on but I wanted to comment that bringing an iPad on tour was a pretty sweet idea. The new smaller one would have been even better, but this one is working great. Last night when discussing routes I was able to pull up the places tab in photos and even with no Internet, maps were cached well enough to be able to show my route with pinpoint pictures of why I thought a couple detours I took were completely worth it. I guess this could have been done with an iPhone or an iPod Touch too, but I've also liked having the size when dealing with photos and blogging.