Today I road from Geraldine to Fairlie by a scenic route to avoid the normal busy path which put today's distance at 75km. It was a long, draining gradual climb with a lot of headwinds. I wound up putting my Garmin in my handlebar bag because it was getting depressing to see how slow I was riding. 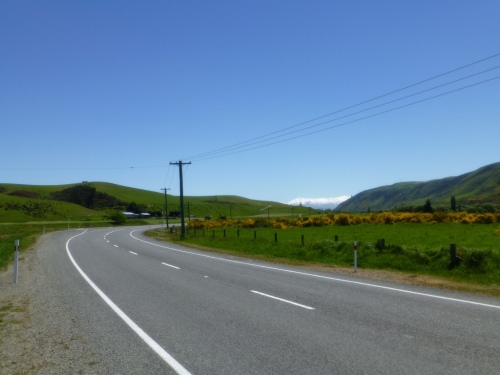 It was a beautiful day here; the first one warm enough for shorts and a short sleeve shirt. Unfortunately the magpie attacks got so bad I actually wound up trying to punch a bird, I succeeded only in making drivers around me laugh, sadly.

Grabbed dinner with the motorcycle tourist camping next to me tonight. A kiwi who's also cycled a lot of the two islands. Told him about my plans and after mentioning my expected time on the North Island he asked if I had considered going home early. Thanks dude. He cited the heavy traffic, unfriendly terrain and little to see.

I made a joke once before about being awful at roughing it. Well tonight the only camp in town was a motorcamp that not only has free showers and a tv with cable, it has free wifi covering the entire grounds. A pile of screaming children as well, though.