Since I've still got some time left I got quickly out of Auckland. Left on a morning train to go as far away from the city traffic as possible, which meant directly west. They don't charge for bikes on the train, which is good, but somehow they didn't feel so prepared for them. I was running a little close on catching the train so I stormed straight into the train station with my bike, someone asked if I needed help and a nice girl from Kentucky helped me get my ticket sorted out. She explained how to get around to the elevator but I saw the train sitting down below with a pair of escalators in the middle. So I manned up and took a fully loaded touring bike down two separate escalators. I loved the look of people going the other direction as I stood there holding up the front end of my bike so it wouldn't roll down. 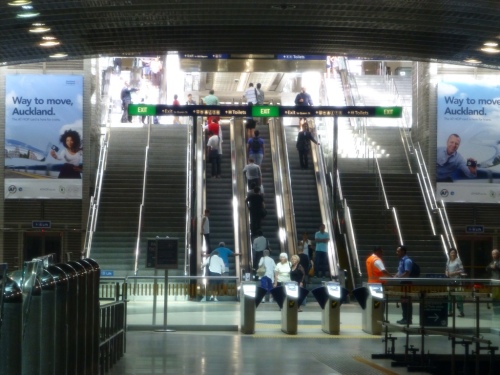 I survived the escalators and caught the train in plenty of time. It was a much less scenic ride than the one going out of Wellington but gave me a chance to do some reading. 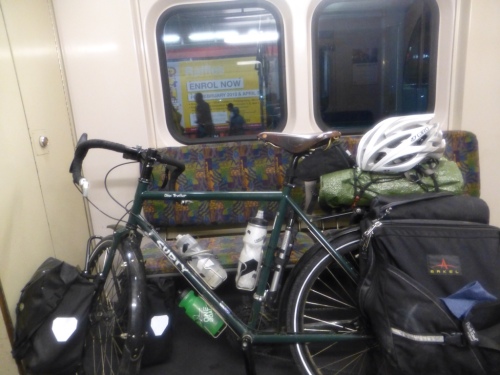 From the suburb of Waitakere I bounced around some back roads as I started to make my way north. Was a quiet country road and rather scenic though full of abusively steep hills. After a couple leg trashing climbs I made a rule that if my Garmin so much as flashed 20% grade I was immediately dismounting and walking. I wound up walking 4 hills by this rule and spent at least 3 others at the limits of what my legs were capable of. 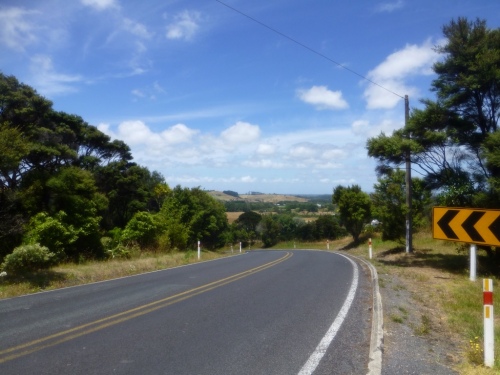 So by the time I made it to Helensville, the last possible non-freedom camping stop for 57 hilly kilometers I decided to call it a day. Only 40km on the saddle today but whatever, I'm in no rush but am in plenty of pain. I'm over attempting to rush anywhere on a tour!

Unfortunately there are no motorcamps in Helensville and the hostel here wouldn't let me pitch a tent. I decided to get a bed anyway, no sense pushing on if there's nowhere to stop. Though I suppose the next part may have been unpopulated enough to find a freedom camping spot but being so close to Auckland, I didn't want to risk trying. 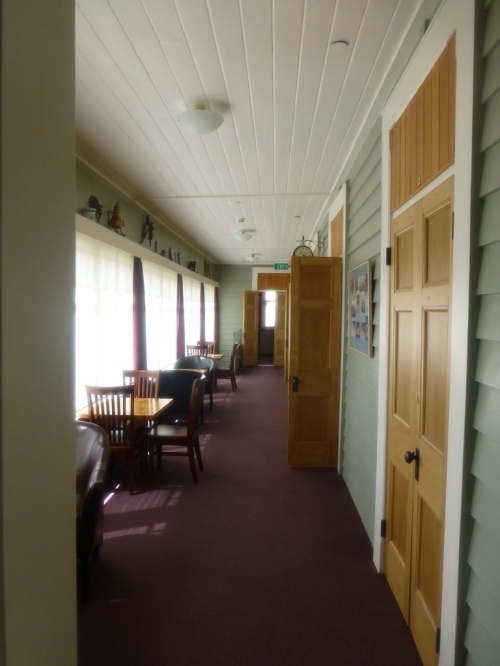 Calling it a hostel isn't accurate. It's really a B&B with a dorm room in the back corner. They actually don't even advertise the existence of the backpackers room so I wound up being the only one in a 6 bunk room. 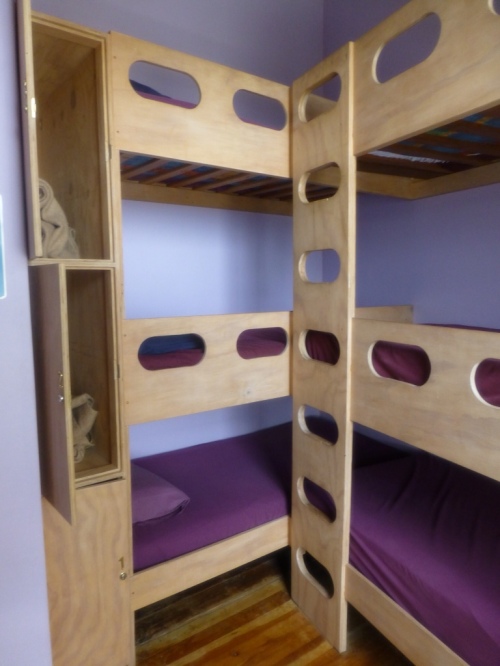 I woke up feeling sort of okay after the pounding I gave my legs yesterday. Today was 65km of constant up and down. Within 15km from the start of my day I'm already feeling it. I start one of the two particularly tall climbs of the day and am reduced to walking when the road becomes too steep. When I make it to the top and see the road signs my heart plummets. A fork in the road, with two dead ends. I took a wrong turn and just made this climb for nothing. 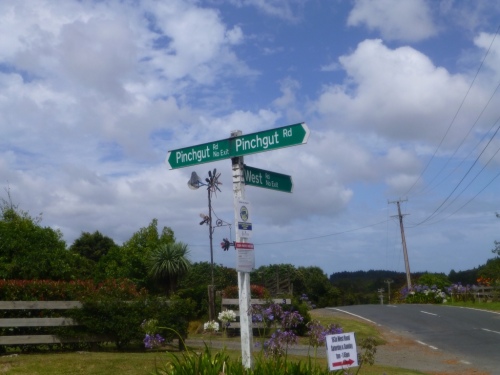 I hit some kind of low. I'm whipped and just walked up a hill that was so steep it was completely exhausting to even walk up and it wasn't even the right hill. Maybe I'll quit, I think. I begin to doubt why I even left Auckland after getting there. When I get back to the missed turn I could just go the other way. I can catch a city public transport bus from Helensville, maybe they'll take my bike.

(Un)fortunately when I reached the turn I had missed I kept heading north. I won't quit yet.

I make my climb of the big steep hill I was supposed to climb and it only gets worse from there. The road continues to be a constant roller coaster of hills, still crazy steep but they are taller now. 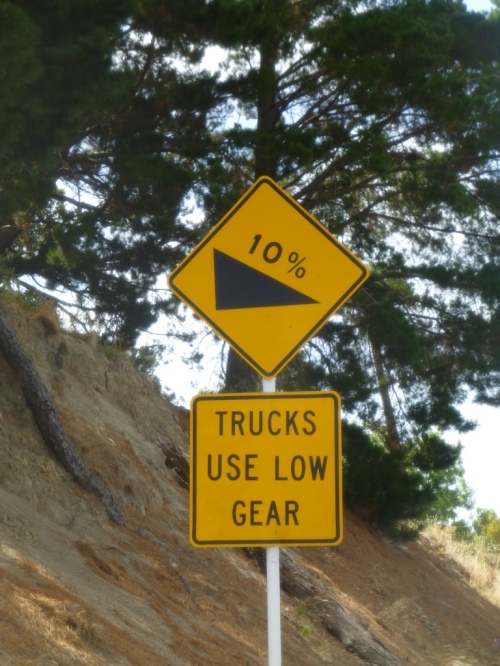 I spend the rest of the ride to Wellsford grunting, mashing, walking, swearing and yelling. It's a pretty nice scenic ride but its hard to enjoy it when all you want to do is strangle the guy who decided a dozen separate times that the road should go over the peak of the hill, not around the side. 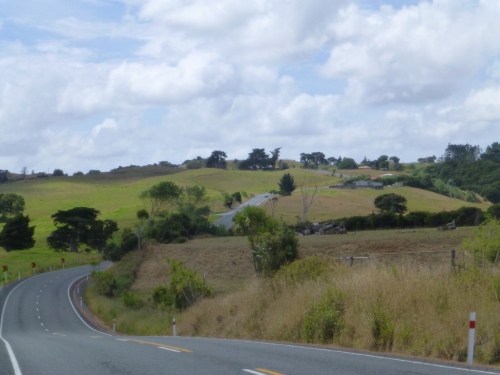 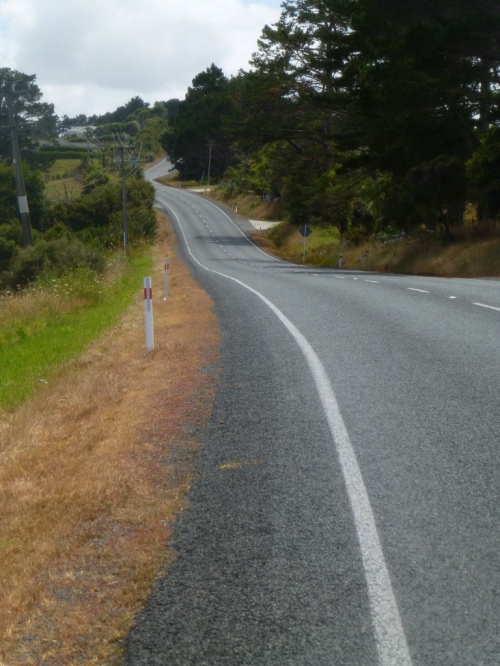 I make it to Wellsford completely drained. Unfortunately I find out I was wrong to assume the Pedallers' Paradise book would be mistaken. It's a decent sized town with everything from a library to a McDonald's but no motorcamp and no hostel. I'm really not enjoying this ride north of Auckland. I decide that it is, in fact, time to throw in the towel. I go to the library and try to book a bus out today. They're all booked until tomorrow afternoon and the library closes in a couple minutes so I write down the phone number and figure I'll sleep on it. I start roaming town trying to find someone who will let me pitch a tent on their yard. Seems people aren't as friendly as they used to be and everyone tells me to go to the pub for a room, which I eventually do. I had been looking for a decent spot to camp on the way in but there was nothing that I could see. To explore side roads was to commit to riding down and back up the steep hill if I didn't find anything.

Fortunately the pub has rooms for $35nzd. Far above my usual budget but it's a price I'm willing to pay to have a safe and easy place to sleep after this exhausting day. 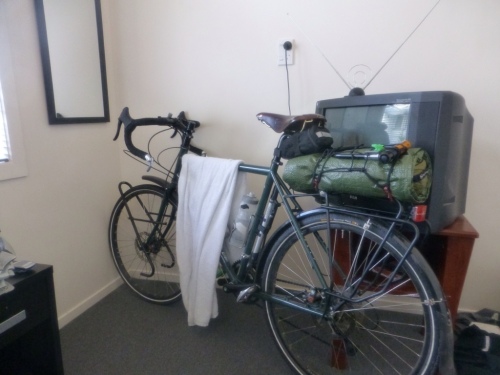 Sorry TV, but your best use is to hold my bicycle up!

Early in my tour I'd watch a little TV when given the chance. Later I realized that its a sure fire way to kill a night of any useful thinking or reading I'd do instead. Hope that's a lesson that carries over when I get “home”. It's conflicting with the fact all of “my shows” have had heaps of new episodes while I've been gone.

A good nights rest in my own room helped me calm down and by morning I was ready to keep riding. Tough I realized it was unlikely that I could make it to Kaitaia in time to get a bus back to Auckland by the date I'd like to be done. The only other stop along the way that would be easy to catch a ride back is Dargaville, two days away. So I pack my things and get on the dreaded SH1.

I was only on SH1 for the first 25km but it wasn't as bad as I expected. Lots more traffic than other roads but nothing too crazy, at least this far north. I passed two pairs of cycle tourists going the other direction, all with very light loads. They are the only ones I've seen since I left Coromandel. Perhaps the hills on the side roads are more avoided than the traffic.

The day continued to be filled with constant hills though less steep and half as tall as yesterday's so it wasn't too bad. Never had to walk, at least. Despite the hell my legs have been put through the last two days I can still wake up and turn the pedals fine this morning. No where near full strength and they sure dont feel pleasant when I start on hills but they keep me moving which sort of surprises me

Not too much of interest on my route today, though I did stop and visit the kauri museum which was pretty cool. Lots of history about the destruction of kauri forests and info about the trees. Sorry, no photos, though.

Not long after the museum the road flattened out. It was a beautiful thing to see no hills anywhere nearby. 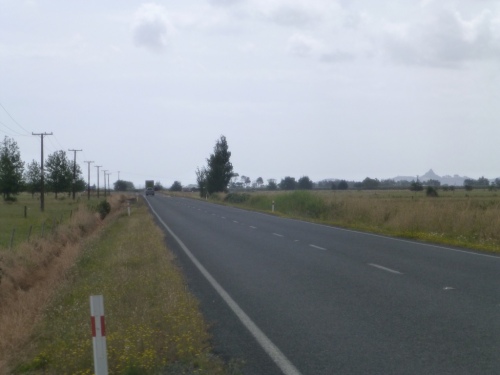 I make it to Ruawei and pitch my tent at the backpackers. Turns out I'm the only one staying here. Weird that I normally like these for the social aspect but now I'm hanging out in a house alone.

I saddled up and headed to Dargaville. Pretty certain this was the last day traveling on my bike so I knocked out the 30km in one solid go. It was still flat (I mean flat, I think I had 5 meters elevation gain in 30km) but it wouldn't be my last ride in New Zealand if it wasn't windy and raining. The wind was a light to annoying cross wind and the rain was occasionally horizontal sprinkling so nothing terrible.

On arrival at about 11am I head to the info center to see what they know about busses. Turns out there's a reasonably priced one (Main Line) that will deliver bike and body to Auckland in the morning. They even guarantee space for my bike, something that other companies would not do. Apparently if other travelers have lots of junk they would have to leave my bike behind for a later bus. No thanks.

So I pay my fee and head to the library to kill time before I can pitch my tent. The motorcamp is pricey and too far out of town for me to want to stay there if I have to catch an 8:30am bus so I head to the backpackers. They don't do tent sites but its only about $6nzd more than the camp so I went for it.

The hostel, Greenhouse Backpackers, is in an old school building. Gives a rather unique feel to it. 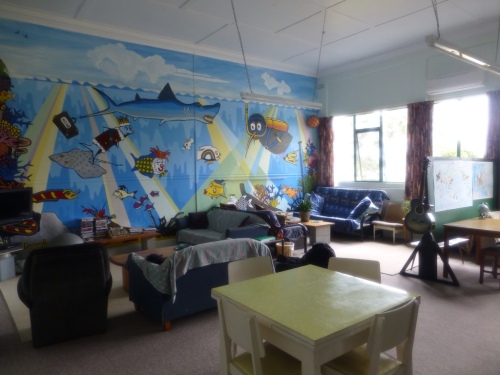 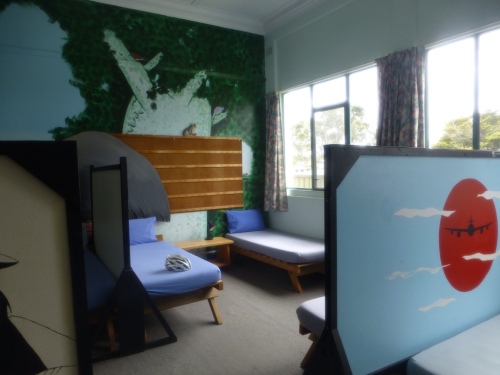 Now I feel strange and relieved that I get an extended break from cycling hard every day. Took a long nap, watched a movie with some others who are staying here and had some beer to celebrate.

There's an article that has been favorited in my instapaper for a while now. I read it a couple times this week and it is a pretty good post on the nature of quitting such adventures titled “Thoughts on sticking it out”. The truth is that I didn't really have a strong reason to continue. I wanted to see the kauri forests but, honestly, it felt like I completed this tour. I made it to the city I'm flying out of and then was just riding for funsies (a fine reason to ride, of course, but not a strong reason to stick it out when you're suffering).

I'm glad I stuck it out at least part of the way. I didn't get to Kaitaia (or Cape Reinga) but I ended on a higher note and gave it a fair shot.

While this is the last day of me touring, I've still got more blogging to do so I guess stay tuned. I'll post about my adventures in Auckland for the new few days and then some wrap up stuff. Gear comments, stats, lessons learned, things I forgot or should have left at home and similar stuff.