Without James getting up before me, it was hard to be motivated to get packing. I spent a while reading and socializing in the common area at the hostel I'd been tenting at. By the time I got rolling it was 10:30 and I realized the library was open now. Delayed again. Got on the road at 11:30. It's a shorter day, I told myself, 60km. I should stop listening to myself, that guy never knows what he's talking about.

I lamented more this morning about whether or not I should do the Rainbow track that runs from Hanmer Springs to St. Arnaud. 120km of gravel through completely remote areas. This would be perfect if it didn't have a few extremely rough hills. The worst being 500m climb in 6km on Jacks Pass. Between the weight and primarily road oriented tires, these kind of hills aren't exactly enjoyable. It also means I have to be lucky or put in huge days to be able to have Internet to Skype my family on Christmas (which I'd like to do early in the morning on the 26th New Zealand time).

So I decided to skip it. Not entirely sure what my plans are but I'm hoping to at least arrive in Nelson on Christmas Day. James will be there for the night of Christmas Eve and Christmas Day, so having dinner with him would be about the best way I could spend the holiday at this point, I think.

So shooting for Nelson on Christmas Day, I figured I'd DoC camp at Lyell around 60km out. Another hot, beautiful and moderately hilly day so I'm pretty tired by the time I make it to the DoC. I plop down to eat a snack and read before setting up my tent. Sand flies descend in quantities I haven't seen since Haast. I make my play in the battle by smearing skin melting 80% DEET on my legs and arms but now they are swarming my clothes. I end up getting bit on the face twice and throw in the towel. I'm not sitting in my hot tent, baked by the sun for 6 hours (its 4pm at this point) and I'm not getting devoured by sand flies (my legs already have enough unsightly red patches from them). 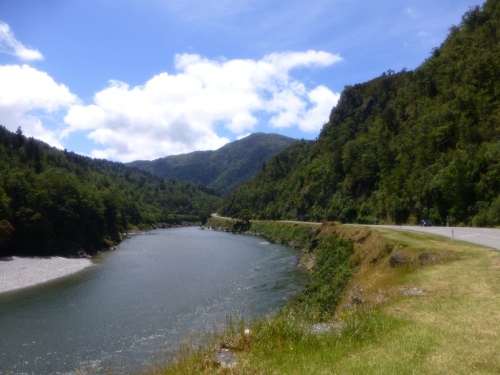 I decide I will ride until I find a place to freedom camp that isn't infested by sand flies. I actually didn't consider the fact that the road I've been on is cliff going up to the left and cliff going down to the right. Regardless, I explore over a dozen clearings, paths and roads in my search of somewhere to put my tent. I felt like I found piles of “almost” spots. Maybe I was being picky, but I found safe and hidden spots with giant rocks or very uneven ground and a few nice unused pathways but with all the good tent spots in clear view of the highway. A nice spot on the beach, but the only patch of rockless sand was the most visible place I've ever considered camping and had a few sets of fresh car tracks through it. This kept happening until about 40km later I hit Murchison which puts me at a metric century and 7pm. I've been sweating buckets today in the heat and am smeared with high strength sun cream and bug repellent. I decide I'm okay with forking out to pitch my tent at a motorcamp to get a shower tonight. Sand flies hadn't really let up at any point during the search so I'm also thankful to be able to write this from inside a building. 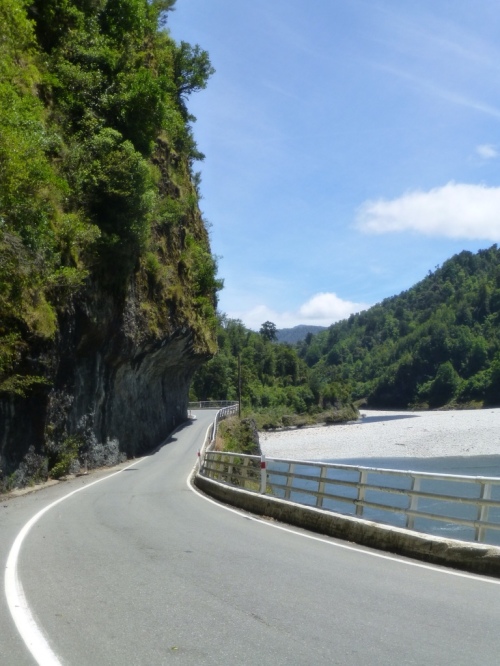