The push today was to make it to Fox Glacier, a tiny tourist town next to, well, the Fox Glacier. About 10km in we stopped for breakfast at a salmon farm and both ordered muffins titled “death by chocolate”. 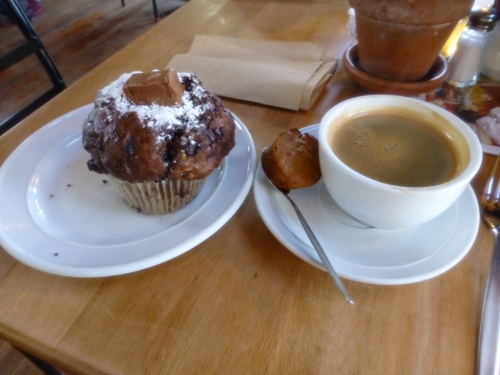 From there we road until lunch time and while stopped a couple and a lone cyclist saw us and joined on the side of the road. The couple told even more stories about touring southeast Asia that continue the trend of people making me really really want to go there soon. Most importantly during this lunch the couple told us of a nice freedom camping spot past the town. I wasn't so up for it as I've been putting in some long and hot days and the lake was the closest thing to a shower I've had recently. The camp sites in town were all $20 and it is a crazy hilly day to go past to any other camps so I caved and agreed we would give it a shot.

After lunch we pushed on without many exciting things other than the terrain until Fox Glacier. We restocked on groceries a bit and headed to the camp spot. Found the picnic area mentioned, saw the tracks to where the couple clearly camped the night before and, uh, also saw a no camping sign back at the entrance. We cooked dinner, lamented about paying the $20 or continuing down this long dirt road for a $6 shower-less DoC site.

We decided to stick it out, assuming soon (this was at about 7pm) cars would stop going past and we could set up. Nope. Cars constantly went by, tourists constantly got out to take pictures of the (admittedly picture worthy) view and we sat in paranoia. Eventually it was starting to get dark around 9:20 and we manned up and pulled our stuff into the bush area and pitched tents.

So now I'm writing this sitting in my tent slightly paranoid. It's my first night freedom camping, actually. My panniers are still mostly packed as I've only taken out the essentials. The plan is to wake at 7am and cycle the 5km to town before we put on cycling gear and eat breakfast.