I set out from Hollyford camp by 8am with no wind but a little rain. Took the 8km gravel road back to the Milford intersection and headed into the climb. It was cold this morning, I could see my breath as soon as I started. 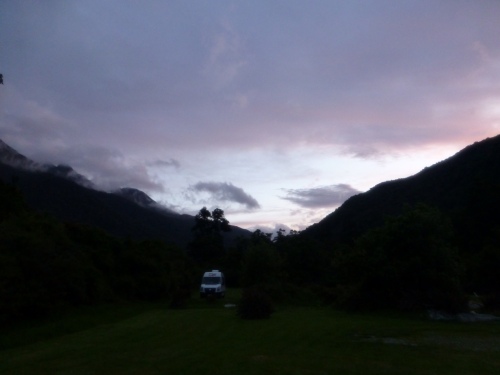 The climb started pretty heavy but eased off for a while. About 6.5 miles total with the last mile being the worst. Nothing quite so motivating/depressing during a hill as avalanche zone warnings and attached no stopping signs. A couple miles in I take a break at the last allowed stopping zone until right before the end. I'm pretty worried about the no bikes/walkers sign that I mentioned yesterday so I cringe whenever I see a parks truck drive by, sure they are going to stop and make me turn around. 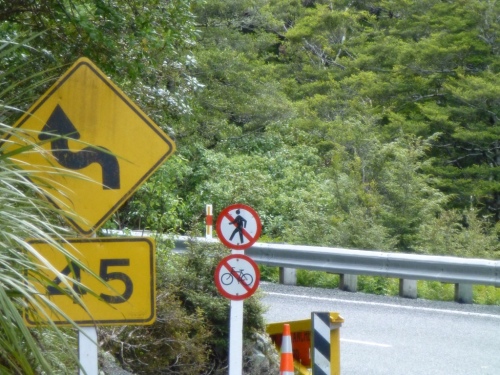 Around the three mile mark I'm starting to really feel it. Ahead I see a camper van slow down and start driving slower than I'm moving as he turns out of my view. I'm certain the road is going to shoot straight up or something's blocking it. When I get there it's one lane gravel until the next turn (maybe 100 feet) and tons of work trucks (but no workers) around. At this point I'm certain that sign is as the other cyclists interpreted, I'm not supposed to be here. Too late now!

Once I'm around the bend the gravel ends and it's back to smooth pavement climbing. The gradient eases a little and I'm feeling good about finishing it without too much struggle. The rain is picking up, temperature dropping down to 41. I could imagine my grandma lecturing me for being out in the cold without a jacket or pants. Just my wool shirt, jersey and bike shorts. Turns out I had left my leggings in the bag I left at camp in Te Anau.

Five miles in I think I'm almost done. I'm looking for the tunnel thinking any turn now its over. Then out in the distance there's a car going up the road. And it's steep. Heart drops, this wasn't the steep part!? Picked up to about 14% and stayed there for the last mile. Had to take a few quick stops on the shoulder then a much longer one at an actual allowed stopping zone. At this point I'm gearing up for the tunnel and descent. Tied my headlight to the bars since I forgot the mount at home, put on my rain jacket, cleaned the clear lenses off for my glasses.

As soon as I got back on my bike I didn't think I had it, if Homer Tunnel wasn't visible really quick I'd be walking. Hopes met when the next bend in the road, there it was. The big hole in the mountain everyone is scared of. I mash and swear as I go up the last very steep segment to the entrance.

I get there and the traffic director waves the car in front of me through and holds up a stop sign. “You're not allowed to bike through the tunnel.” No no no. “But go ask that guy in the orange if he will give you a lift.” He agrees, I load my bike into the work truck and hang out staring in awe into the tunnel while he finishes up.

We get moving and the tunnel is scary enough in a car. Pitch black, narrow, covered in potholes and awful pavement. Actually glad I got stopped.

“You know you're not allowed to cycle on this road at all, right? There is a sign posted right at the bottom.” I told the story about seeing it and talking to locals. He drives right past the open area on the other side of the tunnel. Assumed he was taking me all the way down until he stops at a big stopping area ahead and wishes me luck on the “fun part”. Hurray! Now to drop 950 meters in 15km on a wet road in the rain. Once I got comfortable I was keeping up with traffic, staying at the speed limit until the road started flattening out. Incredible.

By 12:30pm I had made it to camp, pitched my tent in the rain, showered and changed into some dry clothes. To the fjord! 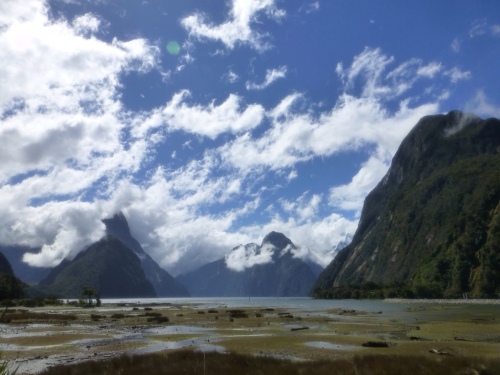