Today is the 28th here, the day before my birthday. I left a bag of my heavier items that I could do without for a upper days at the motorcamp I stayed at and put in 100km to set myself up to attempt a thoroughly ridiculous day on a bicycle for my 26th birthday.

I cycled from Te Anau to Hollyford camp, which is about 8km from the base of the Milford Sound climb. Once again the world around me changed and I was heading into a lush coastal scene. The winds had calmed down a little but not much. Thankfully I was now surrounded by by trees which, for the most part, took the brunt of the wind and I rarely was getting the full hit. 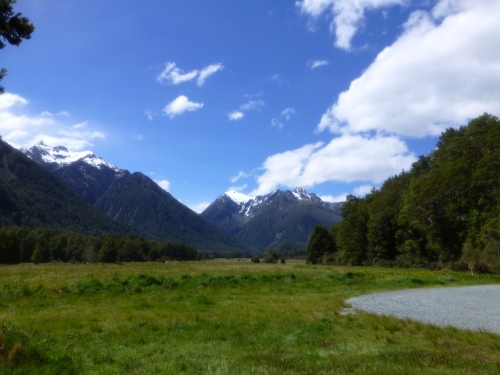 The scenery just kept improving as I pushed on which really helped. Everything was new and beautiful, the wind wasn't often a problem and I was loving it. Looming was the thought of tomorrow's insanity but I mostly tried to avoid thinking about that.

Apparently people like camping on this side of the country. I passed more than a dozen DoC camp sites, most that I stopped to rest at seemed like places to park a camper van, not a good place to pitch a tent. Ignoring them I rode on to Hollyford camp, which was actually 8km after I reached the Milford Sound intersection but given the remote location set way back into the woods, it was worth it.

As I was almost to the Hollyford turn off I waved down a couple loaded cyclists going the other way. Wanted to hear about their adventure to Milford. Apparently they encountered a no cycling/walking sign and decided to play it safe. They hid their bikes in the woods and hitch hiked in. Asked if I brought a lock, suggested I do the same. My ubolt lock and cable was in the gear bag I left in Te Anau, oops. We talked for a while about our trips so far and further plans here then I got back on the bike. Felt like I was defeated.

When I got to camp I asked the person running it about me leaving my bike here for an extra day as I went on by thumb. She had no idea what I was talking about and said she's had cyclists coming through lately and didn't imagine that there was any reason I couldn't ride it. Hm, maybe I will, I said. In the kitchen while I was making food I was talking to some locals and they said the sign is about some walking paths that are closed currently. Guess I have to give it a shot, then.