My life advice for you today is this: if your legs feel like pudding when you wake up, do not cycle on roads named anything similar to “Highcliff road”, especially if you have reason to believe it has earned the name. I spent the better part of my morning pedaling, swearing and a couple times walking my bike up 10-20% grade hills as I took the hard route in. Boy was it worth it as I was rewarded with spectacular views the entire way. 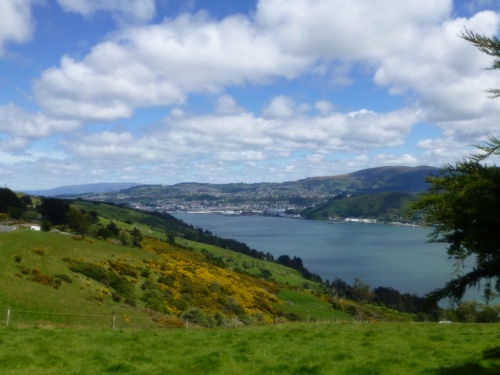 A while later it was finally time to make the descent into the main town of the peninsula and the road had this sign. I think that was the biggest smile I made the whole day.

After a while ride down I reached Portobello, the main town of the peninsula, still grinning. There I ate a burger and pitched my tent, at the only legal place to camp out there. I set off with my handlebar bag and a lightly loaded rear pannier thinking without the weight I could tackle the hill over to the other side of the peninsula for some beaches. Nope, legs still weren't having it. Instead I headed out along the edge of the coast to the albatross center (which was closing as I got there). I did, however, see plenty of birds while there.