Today started out easy. Gentle downhill from camp until a fork in the road. Left takes a busy road all the way to Oamaru, right goes past the elephant rocks and over some pretty hilly areas. I hate my legs so I turn right.

I met a bus of people on what they called a bicycle tour of New Zealand. They get bussed to a small climb or pretty descent, get on their bikes and ride 10km or something and then get back on the bus. Most seemed to be in disbelief of what I was doing, as they followed a similar route but took the bus over all the big climbs and long stretches. 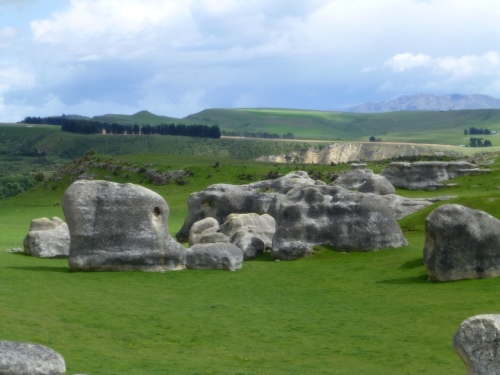 After setting off from where their morning ride ended, I finished the big climb of my day. After recent events I expected a wall of wind to be waiting for me when I could see over the peak. Instead it was thick black storm clouds. Jumped off my bike to put rain covers on my rear panniers, find my saddle cover and dig out my rain jacket and pants. Not long after finishing this it starts hailing so I hid under a nearby tree for a bit. When the hail let off I took off on the descent but it didn't stay away for long. 8 degrees Celsius with rain and hail as you go down a reasonably steep 10km descent is not pleasant. I was so thankful I bought a bike with disc brakes. The bus of cyclists honked and waved as they passed me. If they didn't already think I was insane I'm sure they did at that point.

Sun and blue skies were back out before I made it to Oamaru so all was well again. Apparently there is a penny farthing championship here on Sunday in the Victorian fest that's going on currently. I may take a side trip and come back to see it.

I'm not so good with my camera, gave it to her with flash forced off still from an earlier picture I took.